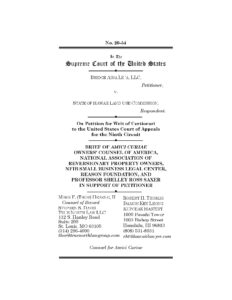 True North Law filed an amicus curiae (or “friend of the court”) brief in the United States Supreme Court urging the Court to review the case of a Hawaii property owner who was prohibited from developing its land by the State of Hawaii.  True North filed its brief on behalf of four prestigious national property rights organizations and an esteemed property law scholar: Owners’ Counsel of America, the National Association of Reversionary Property Owners, NFIB Small Business Legal Center, Reason Foundation, and Law Professor Shelley Ross Saxer.

The landowner, Bridge Aina Le’a, wanted to develop a barren, rocky lava field in Hawaii into new residential housing, but the Hawaii Land Use Commission decided to re-zone the land as agricultural land.  After an eight-day trial, the jury returned a verdict stating that the State of Hawaii had deprived the landowners of all economically-viable use of its land (the lava field was akin to a rocky parking lot and the state itself had rated the soil as poor and inadequate for grazing).  On appeal, the Ninth Circuit Court of Appeals set aside the jury verdict and substituted its own reasoning for that of the jury in violation of Supreme Court precedent.

True North Law is asking the Supreme Court to review this case in order to safeguard a landowner’s fundamental right to a jury under the Seventh Amendment to the Constitution.  If the Court grants True North’s request, it will set the stage for a landmark new decision in the area of regulatory takings and property rights.