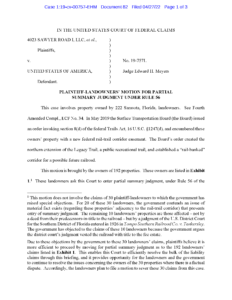 About 200 Sarasota landowners whose property was taken for the development of the northern extension of the Legacy Trail public recreational rail-trail filed a motion in the U.S. Court of Federal Claims asking the court to hold the federal government liable for taking their land without paying them compensation.  The motion was filed by Thor Hearne and True North Law on behalf of the landowners.

In addition to these 200 landowners along the northern extension of the Legacy Trail, Thor Hearne successfully represented the landowners whose property was taken for the southern segment of the trail.