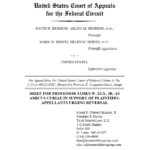 This week, the Federal Circuit held oral argument in the appeal of an important Fifth Amendment taking case where the federal government took private landowners’ property in Missouri for a public recreational rail-trail.  The lower court erroneously held that, even though the railroad had only an easement across the landowners’ property (instead of owning the strip of land over which it built its railway in fee), the railroad’s easement was “unrestricted,” and therefore, allowed for the conversion of the abandoned railway into a public recreational biking and walking trail.

When the landowners appealed the decision, Thor Hearne filed an amicus brief on behalf of renowned professor of property law James W. Ely, Jr.  As the amicus brief pointed out, and as counsel for the landowners repeated in oral argument, the concept of an easement for any purpose is a “judicial unicorn” that doesn’t exist in the law.  As the U.S. Supreme Court has repeatedly explained, railroad easements terminate when no longer used for a railroad purpose.