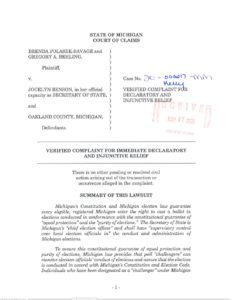 To assure this constitutional guarantee of equal protection and purity of elections, Michigan law provides that poll “challengers” can monitor election officials’ conduct of elections and assure that the election is conducted in accord with Michigan’s Constitution and Election Code.  Individuals who have been designated as a “challenger” under Michigan law are allowed to observe the conduct of the election and object to any irregularities.