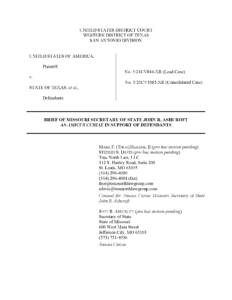 Thor Hearne, Steve Davis, and True North Law have filed an amicus curiae brief on behalf of Missouri Secretary of State Jay Ashcroft in United States v. State of Texas, the federal lawsuit brought by the Biden Administration against the State of Texas regarding Texas’ new election law statute.

A copy of the amicus brief is available here.

Secretary of State Jay Ashcroft, a licensed attorney in Missouri, recently filed an amicus brief with the federal court in Texas, defending the Texas Election Integrity Protection Act that was passed by the Texas legislature in August of this year and signed into law in September.

The Texas bill (Senate Bill 1) requires that voters casting mail-in ballots provide some form of identification, from a driver’s license to a bank statement.  The bill also bans 24-hour voting, imposes restrictions on drive-thru voting and ballot harvesting, and prohibits election officials from sending unsolicited mail-in ballot applications.  The legislation was recently challenged by the U.S. Department of Justice.

“The Texas law made appropriate much-needed changes to improve Texas’ election integrity without infringing on the ability of eligible Texans to vote,” Ashcroft said.  “In a partisan move, the legislation was challenged by the Department of Justice, claiming the measure will ‘disenfranchise’ voters. The justice department’s claims are unfounded and baseless.”

Ashcroft, a strong supporter of election reform, is working with Missouri legislators to pass election integrity legislation in the 2022 session that would strengthen elections and voting in Missouri.  Ashcroft supports the Texas legislation because it could be a model for other states, including Missouri, on election reform measures.