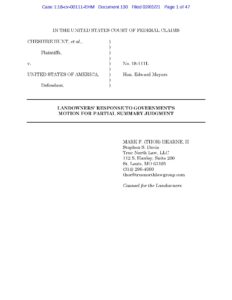 ​The federal government took hundreds of Sarasota landowners’ property to extend the Legacy Trail.  But rather than pay these owners that compensation the government admits they are owed, the government filed a motion arguing that the compensation it must pay should be decreased due to the “scope of the trail sponsor’s interest obtained by operation of section 8(d) of the Trails Act.”

In response, True North Law filed this response with the Court explaining the government’s erroneous reading of the Trails Act and demanding that the government pay Sarasota landowners full and just compensation for the land the federal government took.  We expect a favorable decision from the Court soon.

Sarasota landowners represented by @FederalTakings ask court to hold government liable for taking their land in violation of the 5th Amendment. https://truenorthlawgroup.com/sarasota-landowners-represented-by-thor-hearne-and-true-north-law-file-motion-asking-court-to-hold-the-government-liable-for-taking-property-for-the-sarasota-legacy-trail/ @invcondemnation

Congratulations to Jim Burling at @PacificLegal for being chosen to receive the @BrighamKanner Property Rights Prize! A great honor and well deserved! https://www.inversecondemnation.com/inversecondemnation/2022/03/burling-to-receive-william-mary-law-schools-2022-brigham-kanner-property-rights-prize.html @invcondemnation @WMLawSchool